With her 44HH tits and firm round ass, porn queen Ashley Evans is the perfect smother bitch. Ashley gets into an argument with her prude neighbor regarding her parading around the pool showing off her huge chest. The argument turns nasty when the guy tells Ashley to go "fuck herself". Ashley tears into the guy ripping off his clothes. She throws him onto the bed and shows some real wrestling skills as she gets him into an arm lock driving his face into the bed. Ashley screams at him telling him to "get that cock out, and let's see what you got"! Ashley turns him onto his back and smothers him with her massive tits. She tells the guy that he is just a fucking wimp that she is looking for to kick some ass. She proceeds to hit him with some very hard body punches then gets him into some waist scissors crushing his ribs.

She really pours on the beating screaming at him to "tell me how you like it!" The guy cries out for mercy but he gets none as the physical and verbal abuse continues. Ashley gets him into a painful double arm bar as the wimp cries out in pain. She turns him over and proceeds to face sit him as she says to him "you like this shit wimp!" Ashley then takes turns boob smothering him and face smothering him with her pussy and ass. When he comes up for air Ashley makes him say three times, "I love your big tits!" She then orders him to "lick my nipples". As he licks her nipples she boob smothers him then makes him lick some more. Ashley then forces him to eat her pussy as she face sits him. She screams at him to "get your face in there and eat harder and make me cum you asshole!"

She makes the guy hang his head and shoulders off the side of the bed as she face sits him more. She then pulls him back on the bed and sits her ass on his face and orders him to eat her asshole out. Ashley is so turned on that she bends down and proceeds 69 him to get him hard. When the guy gets hard Ashley tells him that " I am going to ride your cock and fuck you inside out!" Ashley sits on his hard cock and rides him screaming out in ecstasy "fuck that hot pussy you wimp" and " fuck that oussy good, give it to me hard asshole!" After nearly fucking him to death, Ashley sits on his face again and order him to lick her cunt and lick up all the juices. Ashley face sits him and he licks her hot pussy. 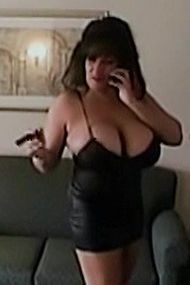