Killer-cute Carmen is a gorgeous dark-haired beauty who uses all her wrestling skills to beat on Mike's ass, but somewhere along the line both got so turned on by the positions and holds they were trapping each other in that they had to go down on each other. This is an unbelievable match as the wrestling maneuvers turn into sexual maneuvers and the sexual moves go back to wrestling moves.

You have to see to believe this incredible 69 action! See Carmen control and dominate Mike as she holds him down with her knee on his stomach, while she pushes his head back with one hand and jacks him off with the other. See Carmen choke the hellout of Mike while she is straddled naked behind him; and see Carmen do something never seen anywhere before - she arm bars her opponent while his dick is still in her pussy! 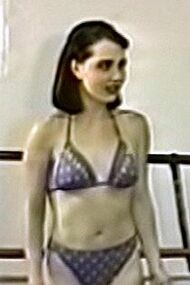