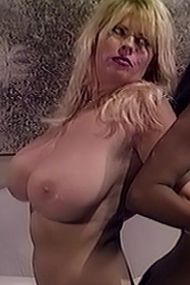 After beating up her neighbor Tommi in FTV-34, Kimberly Kupps takes on Tommi's husband Ed. Ed wants revenge for the beating his wife took at the hands of Kimberly. Ed finds out soon that Kimberly Kupps is one tough woman. A hard punch sends Ed flying and Kimberly pounces on Ed and works him over. Ed is no match for the size ( 5' 11'', 165 lbs.) and strenght of Kimberly , nor for her 64HHs as she smothers him into dreamland.