Ron, the Strong, Powerful Male vs the Nasty Bitch Mistress Sandra. Ron uses wrestling as an excuse for Sex and loves to challenge females to wrestle with him. He is confident that he can beat anyone who steps into the ring with him in grappling competition.His idea is the winner can have his or her way with the loser and his way is fucking the beaten foe. The match begins with Sandra showing the muscular Ron she can wrestle and is not as easy a target as he thinks.Back and fourth wrestling with plenty of action. Ron proves he is the better wrestler,then fucks Sandra from behind. Next, she gets on her knees and blows his erect cock until he cums in her face. 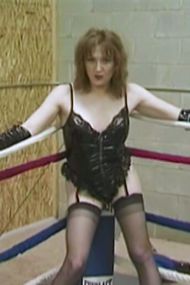